Once you’ve place the records in the ‘Selected Records’ Queue which then you want to generate an ‘XML’ File(s) and/or Cache to your local Profile for your Windows Media Center Library, then do the following: 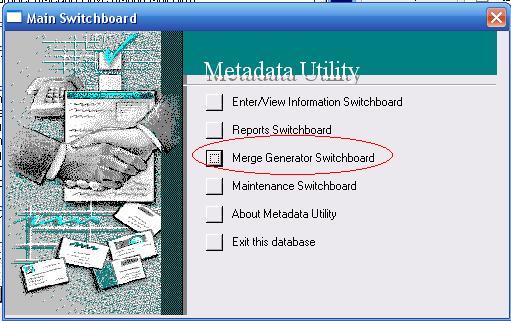 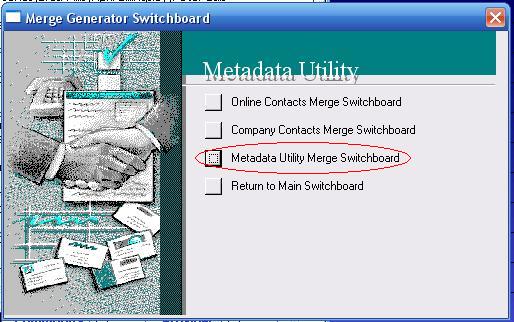 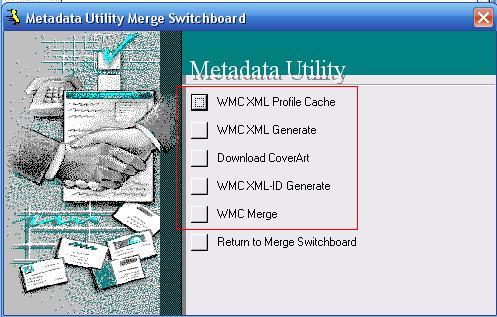 Note:
If NO records have been selected, then Metadata Utility will ask you if you want to run the Command clicked (ie. ‘WMC Merge’, ‘WMC XML Profile Cache’, ‘WMC XML Generate’) on ALL available records from your Media Library Queue (only). After the Batch Job Processing has been completed, then Metadata Utility will automatically Un-Select ‘All’ Records from your ‘Media’ Queue. This only happens if ‘all’ records are automatically selected.
If you have manually selected a group of Records from your ‘Media’ Library Queue for Batch Processing, then after the completion, the manually selected records, will still remain ‘selected’ (an may need to ‘manually’ be unselected).
To manually ‘Un-Select’ at once all previously ‘selected records, see ‘Metadata Utility Maintenance Sel-Unselect Switchboard’ Section, click here

Generate an XML-ID for Records in the Selected Queue that have no XML-ID (Batch Process).
-Alternative, if no records have been selected, then Metadata Utility will prompt if ‘all’ records should be selected and process all Records. Note This process will apply to only records in the ‘Selected Records Queue’ that have a missing XMl-ID. Any existing Records with an existing XMl-ID will not be impacted by this process (existing XML-ID will remain the same and will not be changed).

This functionality is built only for advanced users ONLY.
Using this functionality, you can manually and as granularly as needed, generata, examine the contents/creation of the XML Metadata Information for any given movie.
This feature is designed for advanced troubleshooting.
For example, after generating the XML Files with all the desired Metadata Information, this information however is NOT displayed or not properly shown in Windows Media Center and you whish to manually research further to find the cause and apply the necessary changes for the Metadata Information to be shown in Windows Media Center properly. 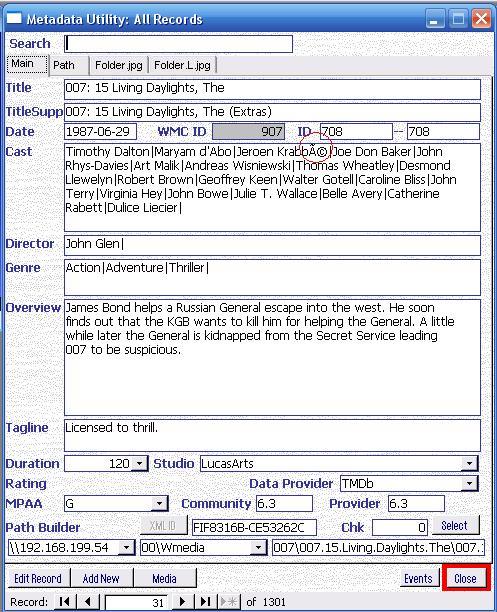 IMPORTANT
Due to the limitations in Windows Media Center, avoid having problems during XML Files Generation and/or Management by avoiding any of the following in within your Metadata Utility Record(s) (Data):
-double Quotes
-Single Quotes (even single quote such as ‘Email Address’ –see the single quotes– or, It’s own… –see the apostrophe after ‘it’. In such case, use instead “it is’ instead of ‘it’s’ WITHOUT using single quotes).
-Special Characters and/or Non-English Punctuation.
Metadata Utility is mainly built for an English Character Set. That said, we have had customers that use other languages such as -not limited to, listed in no particular order–: French, German, etc who have reported no issues while using Metadata Utility, even in their own language. Having said that, we have seen, in such cases where the above listed characters are found, that during the XML File Generation, that those generated XML Files may not be always properly formatted and thus cause problems in displaying that XML Metadata Information in Windows Media Center.

Note:
Curating/Cleaning Up/QRing your Data will ensure your Data is clean and readable and it is an essential, VERY important step to ensure the later creation of your Metadata Files (XML Files) works properly without errors.
Furthermore, should you need to have a detailed Troubleshooting of your XML Generation process, then it will be crucial that the Curating/QR process has been completed. Failure to ‘QR’/Clean Up the records in Metadata Utility may result in errors during the automated XML File generation (so it is either ‘do it now’ as you are inserting/downloading the information either using the ‘Metadata Utility Online Search Tool’ and/or manually entering the Data ie. ‘Adding a Movie Manually’ yourself, or ‘do it later’ as once you encounter errors in your XML Files, such as (not limited to, listed in no particular order): missing XML File Information, Windows Media Center not displaying the Metadata Information correctly, showing duplicate/’ghost’/non-existent Movies in your Windows Media Center Library, etc), then you will be forced to troubleshoot ‘why’/’which’ Record(s) are not beeing displayed properly.